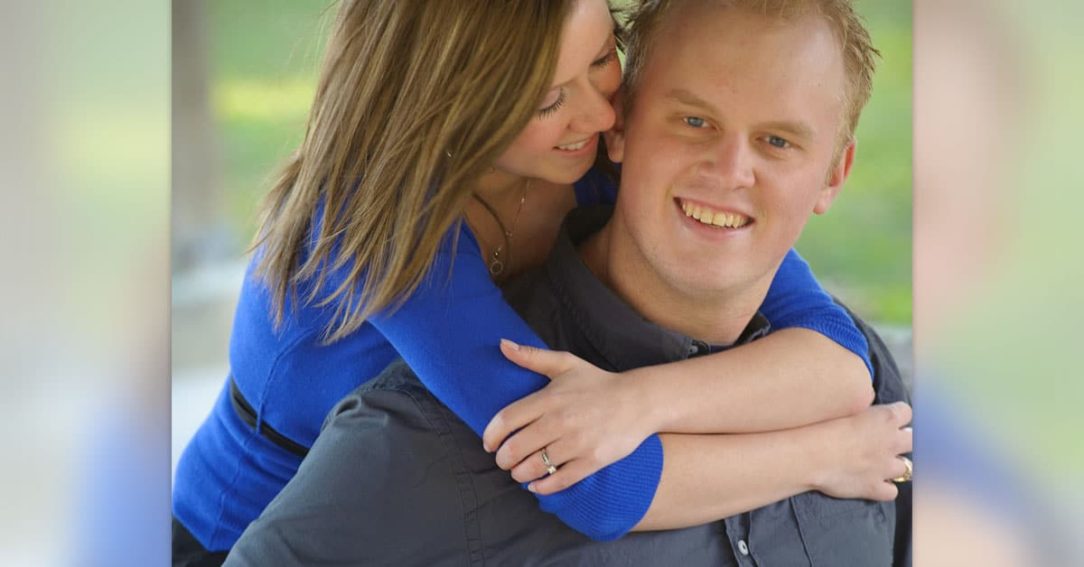 My husband Jonathan was the life of the party. He really knew how to connect with people, capture a crowd and make people laugh with pure gut-wrenching joy. And he knew it too, even at our short time in hospice, when our room was one person away from becoming a mosh pit, wine freely flowing, rocking out to a little AC/DC. He loved being the centre of attention. And so this article about him? Fitting.

Jonathan’s hospice story is most certainly unlike many others, simply because of his young age. He was only 32 years old. Only 18 months prior to his passing, he was diagnosed with a grade 3 astrocytoma. Brain cancer. Out of the blue. We were devastated, of course, but it was Jon’s positivity that kept us all functioning and moving forward.

As his illness progressed, Jonathan’s mother, Cheryl, an angel in her own right, moved in to help. At that time, I went on leave from work, so we could fully focus on providing the care Jonathan needed. But the thought of the inevitable was in the recesses of our minds. We thought we had more time.

The decision to move to hospice was also quick. We needed to move fast. But I will be forever grateful that we did. Upon entering the beautiful building, I felt relief, and immediate warmth from the volunteers, nurses, and doctors. Lola wrapped Cheryl and me into her arms and told us that we were no longer caregivers; we were now wife and mother.

Jon’s room was like a hotel room – clean and crisp, without the clinical feel and smell of a hospital. We put his Green Bay Packers hat on the hook on the wall and his quilt at the end of the bed. We were asked if we were hungry and offered pizza, which was brought to his room pronto. I was also informed that new visitors were given a monarch chrysalis, to be released in the courtyard when it emerged, 10 days from the date on its jar. Jenn, our nurse, wasn’t sure if there were any left, but then she returned with a jar in hand. “It’s the last one,” she told me. Tears filled my eyes when I looked down at the date. It was our wedding anniversary, June 26. “Then it’s meant to be,” Jenn said.

That night, family piled into Jonathan’s room and we all shared laughs, tears and some wine. The same scenario could have been replicated at home. But it was at the hospice.

The next day, Jon was able to go outside. The beds just roll right out into the courtyard. We had so much more planned for Jon at the hospice, but we unfortunately didn’t get the time. Later that afternoon, Jon took his last breath, surrounded by family, going out to his favourite rock music. The hospice offers “cuddle therapy”, where you can lie with your loved one in bed one last time. Lola assured me she would clean Jon up nice. When I re-entered the room, he looked just like himself, Packers hat and all. I never wanted to leave and I was never rushed.

Jonathan was wheeled in to the reflection room, his Packers quilt draped over top of him, his face still visible. After a couple pre-selected readings, we came up in small groups to release floating candles into the water below, and reflect on our treasured memories of Jonathan that will burn brightly forever in our hearts.

As we followed Jonathan through the hallways towards the hearse out front, everyone proceeded to stand at attention. Those volunteers and nurses who were involved in Jonathan’s care, if only for a moment, stood by the front door to tell us it was an honour to have served him. I was speechless.

Jonathan’s aunt Tammy may have put it best when she said we had “the unfortunate pleasure” of needing the hospice. I will never understand why this happened, why someone so special and loved had to be taken away from us, but I will always cherish the 17 years I spent with Jon. Our family was blessed to have experienced hospice care, even though we were not quite there a day. It didn’t matter. The experience was nothing short of amazing, if you can use that word at such a tragic time. “It takes an extraordinary heart to do what the people at the hospice do,” Tammy said. “Their kindness, compassion and thoughtfulness will always be appreciated and never forgotten.”